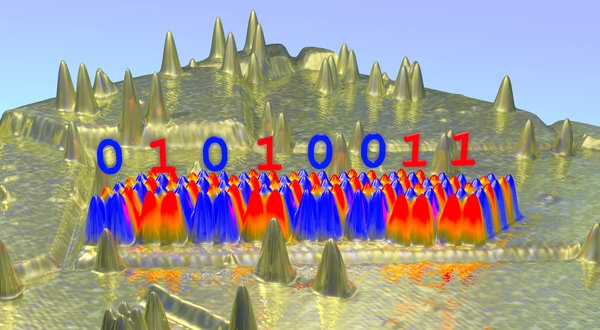 Views: 964
An international team of scientists has made a breakthrough in the magnetic manipulation of nanoparticles that could lead to a big boost for small scale digital storage in portable devices.
The research, led by scientists from the Universitat Autònoma de Barcelona and the Institut Catala de Nanociencia i Nanotecnologia, centers around the ability to produce what is known as antiferromagnetic coupling (AFM) in particles as small as 10 nanometres.
AFM is an magnetic phenomenon critical to digital data reading and storage systems such as hard drives and MRAM memory. It involves the juxtapositioning of magnetic polarity in the layers of a structure or particle. This opposing polarity is used to store data as 1s and 0s.
learn more in gizmag
(Visited 24 times, 1 visits today)
Magnetic nanoparticles breakthrough could help shrink digital storage by Grant Banks was last modified: February 22nd, 2014 by futurist
digitalnanotechnologystoragetechnology
0
Facebook Twitter Google + Pinterest
previous post

Self-powered Electrical Generators: A reality before 2050 by Harish Shah

Tiny Machines Inside Your Body By Ben...

The Future of Brain Implants by Gary...

What is Digital Twin?